As if ad fraud and viewability weren’t enough to keep the online advertising industry up at night, over the past few years, a new monster has taken their place under the proverbial bed. It’s ugly, it’s mean, and it blocks your ads.

While adoption of ad blockers is on the rise, undoubtedly affecting publishers, many wonder if it has, in fact, affected advertisers and ad spending?

In August 2015, PageFair and Adobe released their 2015 Ad Blocking Report. It revealed startling statistics — namely that ad blocking had grown by 48 percent in the U.S., reaching up to 45 million active users.

While PageFair has an interest in inflaming fears over ad blockers (according to its website, PageFair “serves to advertise in a manner that ad blockers are unable to circumvent”), the issues it unearthed were real. Publishers, marketers and ad agencies must now acknowledge that ad blocking is part of their landscape.

The Quest for Answers

Whether the software is browser- or browser extension-based, data reveals ad blocking is not a passing phase. And after several lawsuits failed to find ad-blocking practices illegal, the advertising community is being forced to examine other options.

Is whitelisting the answer for publishers? AdBlock Plus, the most prominent, widely used ad blocker, offers the option to become “whitelisted” — in other words, to be an exception. To qualify for the “Acceptable Ads initiative,” a website’s ads must:

· Be transparent that they are ads.

· Be appropriate to the site they are served on.

But are ad blockers angels that protect consumers from intrusive, code-heavy ads, or are they intermediaries, profiteering with pay-to-play offers? It’s worth noting that even if publishers get whitelisted, AdBlock Plus gives users the option to disable ads from whitelisted companies.

Is native advertising the answer?

In the wake of increased ad-blocker usage, media companies have begun favoring native content over traditional display — serving ads that take the shape of the host media property — to circumvent blocking technology.

While the term “programmatic native advertising” may seem like an oxymoron, companies like Nativo, Sharethrough, and TripleLift “serve” native ads to multiple sites, rather than “publish” them directly to one.

It sounds like a perfect solution for advertisers and publishers, but there’s a catch. The code needed to outfit these placements for multiple sites often gets the ads caught by the very ad blockers they’re hoping to avoid. Last year, Adblock Plus blocked the headline of a sponsored post on Yahoo, and another showed up without text.

Marketers are discovering native may not be the panacea for delivering relevant content at scale, and publishers are being forced to admit that this is not a perfect solution to save their ad revenue, either.

Is mobile the answer?

For quite a while, it seemed mobile would be the final answer — the one remaining pasture where blockers had not taken hold. In its first-ever forecast on U.S. ad blocking, eMarketer found that the ad-block problem was far more widespread on a desktop than mobile. “Ad blocking is more common on desktops and laptops because screen sizes are large enough to accommodate multiple ads,” said eMarketer senior analyst Paul Verna.

The hostile viewing environment on desktop includes instances where videos may play audio despite being out of view. In light of that, it’s perhaps less surprising to see that mobile video ad spending is projected to surpass desktop for the first time in 2017.

One of the environments least affected by ad blockers had been mobile apps, where ad-blocking technologies had not been able to prevent ads from loading. That appears to be changing. Earlier this year, PageFair released a report that concluded: “Mobile ads are now vulnerable to blocking, whether on the mobile web or in-app.”

Impact on Spending and Revenue

As the once symbiotic relationship between consumers, marketers, and publishers breaks down with the rise of blockers, publishers are feeling the pinch. This year alone, publishers are being stung by $21.8 million in “blocked revenue,” according to Adobe. No wonder so many publishers are now “nudging” their readers to disable blockers while browsing their content.

There’s a limited amount of data on whether the impact has translated to any change in actual display outlays or spending decisions by advertisers and agencies.

Let’s take a look at the numbers.

With the 2015 release of the PageFair/Adobe report, you might expect growth to have slowed — if not reversed — if marketers were indeed shifting dollars into un-blockable marketing vehicles. But in fact, 2016 posted modest gains in U.S. display spending, adding more than $6 billion compared to the previous year, for a total of $32.17 million. 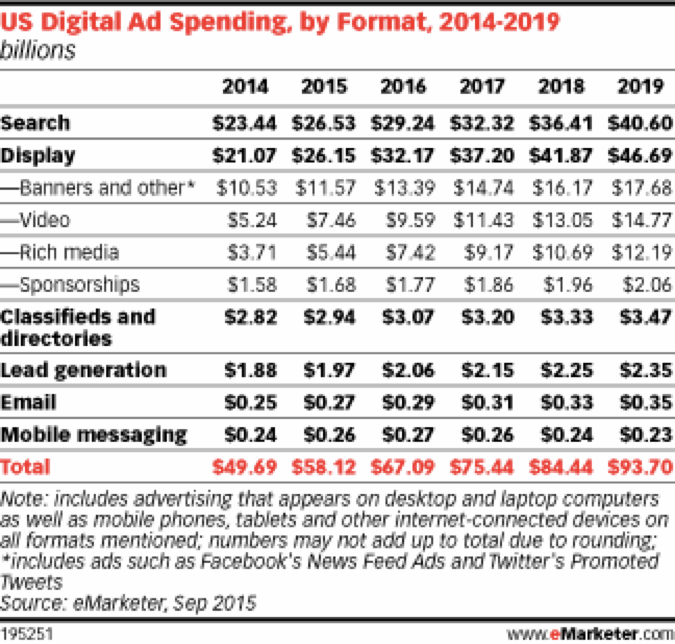 Back to the Original Question…

According to the numbers, while display spends growth has not accelerated tremendously, display spending has not slowed — at least in any meaningful way — due to a rise in ad blocking (or any other obstacle the industry is faced with). This tells us that display, despite the challenges, remains a viable investment for advertisers and a viable source of revenue for publishers.

Display will continue to do what it has done in the face of other obstacles — evolve and rise to the challenge as part of a mix of paid, owned, and earned media that work together to achieve the greatest results.

This is an opportunity to restore balance in the relationship between brands, publishers, and consumers. The biggest change that marketers (and publishers) can make is to avoid testing the 75 percent of Americans who have not installed an ad blocker already.

What is your current ad strategy? How do you work to stop ad blocking on your website?

Marilyn MeadMarilyn has been connecting the dots between ad spending and ad buying behavior for close to a decade, working with clients ranging from Fortune 500 publishers and media networks to adtech start ups and marketing agencies. She's held a number of roles at leading sales intelligence companies, and currently serves as Product Marketing Manager at List Partners Inc., overseeing Winmo, The List Online and AdDataExpress among other brands. She's a proud native of Southern California, and despite living in New York for the past 15 years, continues to hold a valid California driver's license.
More about Display Advertising
Display Advertising Stats 2019: Semrush Study [Fashion Edition]Google Display Network is one of the most influential and profitable digital marketing channels that majority of Fashion & Lifestyle companies underutilize while it can be a goldmine of targeted, quality, lower of cost traffic.

9 min read
How To Set Up a Display Campaign: an Interactive ChecklistThis step-by-step checklist will help you successfully launch a Google display campaign. Just choose the primary goal of the campaign and we‘ll generate an actionable how-to guide to help you at every stage, from choosing the right audiences to fine-tuning the landing pages.

9 min read
A Guide To Boosting Google Display Network PerformanceThis post outlines the common use cases and targeting options for Google Display Network (GDN) activity, common attribution problems and key metrics you should be using to put a business case together for full-funnel GDN investment and measure the success of your display network activity.